Family Carers: Working in Partnership With The Dementia Training Company

The Dementia Training Company Ltd, is delighted to introduce you to our ‘Voices for Change’ group.

We are daughters, wives, partner and husband to those we love who are living or have lived with dementia.

The group met when we became involved in the Dementia UK ‘Carers as Educators’ Project back in 2012.

The project was aimed at improving the quality of dementia care and support received by people living with dementia and their families by utilising the experience of family carers to develop and deliver a range of innovative and appropriate training courses aimed at staff working in Care Homes.

As a (then) Associate Trainer for Dementia UK, Sarah took the lead in delivering the training for the Hampshire based element of the project.

Though the Dementia UK project ended in 2013, the ‘Voices for Change’ Group continues. In 2013 John was ‘recruited’ to the team.

The Dementia Training Company aims to involve a member of the ‘Voices for Change’ Group as Associate Trainer/Carer Educator in as much of our training as possible. It is our belief that professionals working in all care sectors and of every role deserve to hear the voices of those directly affected by the experience of dementia to both enhance their understanding and develop their practice. 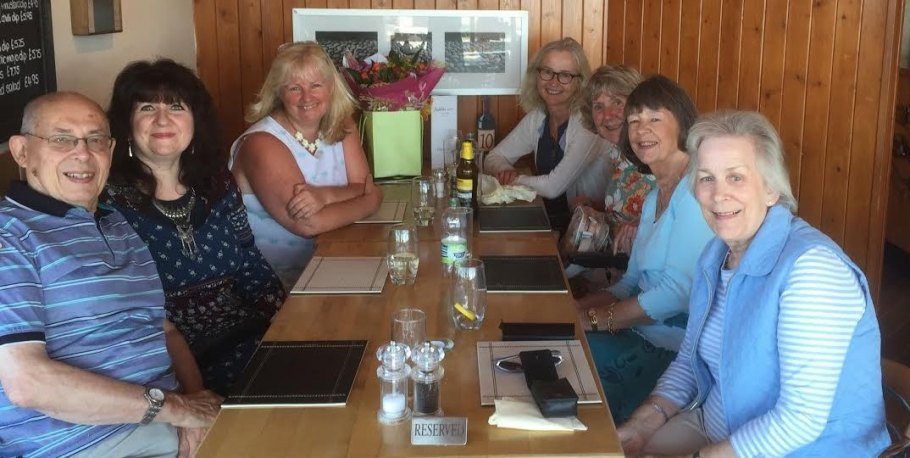 My name is Terry O’Dwyer. I was married to Peter for forty years. We were both born in London and lived close to each other for many years but did not meet until we were adults and had both been married.

We were very happy bringing up my baby and Peter’s teenage daughter and proudly watching them marry and have their own children. He loved his family and worked hard for us all running his own greengrocer’s business. A keen sportsman; swimming, playing football and golf to a good level.

The first signs that something was wrong was his anger and irritation about so many things, totally out of character. He became muddled with money and lost his bank cards many times.

He was eventually diagnosed with dementia – Alzheimer’s type in 2007. A shock to us both. And there started a journey.

I’ve had good support but it was hard and upsetting for us both as the man who I trusted to always know what to do, and could talk to me about anything, gradually became my child, unlearning everything he had learnt, eventually having to be bathed and fed and unable to have a conversation.

It was heart breaking and so hard for him as he always knew something was wrong but did not understand what.

He eventually died in 2012 after a year in a care home and then a nursing home.

I felt so guilty about not being able to look after him until the end at home but after four years as he deteriorated I realised he needed more help than I could give.

I was approached by Dementia UK some months before he died and asked if I would like to talk about being a family carer. I was not very confident about speaking in public but felt anything I could do to bring dementia out in the open more and for there to be more understanding of the impact on families I would have to do.

After a year Dementia UK stopped providing training to focus on Admiral Nurse Services. Sarah and Tim decided to continue to support the family carer group and continue to deliver training with us as part of DTC.

I have got back so much more than I have given. The impact of telling my story has been wonderful. I am still amazed that mine, and the other family carers stories, can move the people having the training and make them see the person with dementia that they are caring for as a whole person, who has lived a life before dementia.

It has been very rewarding.

My name is Jane Ward and I was carer for my mother Ella who had Vascular Dementia.

I was living abroad when I first realised that there seemed to be something going wrong with mum; she would call me in the middle of the night, where before she had always managed the time difference. She no longer showed an interest in my work, friends or the trips I was taking which was so unusual for her, but I now realise was simply that she was losing track of where I was, who I was spending time with and what I was doing.

I returned to the UK in 2006 and we fought for over two years to get a proper diagnosis, mum’s GP had been convinced Mum had depression but grudgingly arranged for a scan, the results letter confirming her dementia then sat in her file at the hospital for the two years and it was only a subsequent visit to A&E at another hospital when she experienced a bad skin tear that her dementia was recognised and the original diagnosis revealed.

I had been working part time gradually reducing my hours as Mum needed more and more support. A simple cold in late 2009 took me down and it was obvious I had been trying to keep too many plates spinning. It was an easy decision to leave work and care for Mum full time, she was becoming increasingly insecure, needed prompting to do the simplest of tasks and at times would get lost even close to home.

We spent the next three and a half years making the most of the situation. I was fortunate that Mum was an incredibly positive person; she did have bad days, and as her dementia progressed she would become increasingly frustrated and sometimes angry,  but mostly she looked at the bright side of life and enjoyed the things she could still do rather than dwelling on the things she couldn’t.

As her needs increased, I did need to call on outside support; a couple of ex nurses visited regularly to help with sitting and some personal care, they also maintained my confidence in what I was doing for mum. Mum also started going to day centre a couple of days a week. The first morning she left in the minibus, heading away for less than six hours, I felt bereft and more guilty than I had ever felt in my life, it took months to come to terms with what felt like an abandonment of her and I never felt easy with the idea that I should use those hours for me to do things just for me. I can’t imagine what it would have felt like if it had been necessary for her to go into care, I’m not sure I would have been brave enough to make that decision.

In late 2012 mum’s immune system started deteriorating and she had a run of infections. She lost her mobility, began to have communication issues and her zest for life dimmed. I nursed her at home until her passing in early March 2013.

I joined the DTC carers team in 2012 while Mum was still with us, and have continued since she died. It has been an incredible privilege to be part of this work. Knowing that our experiences help to influence the way care staff think about those they care for is such a legacy for our loved ones. I have met some incredible carers through this process and feel gratitude for the respect they show for our life stories and our loved ones. I have gained so much myself knowing I have had the opportunity to make a real difference for those who will follow us with their own journeys with dementia.

John has worked with the Dementia Training Company since 2013.

His wife, Kay, was diagnosed with Alzheimer’s Disease in 2005 at the age of 69, having first exhibited symptoms about 2 years earlier. John cared for her single-handedly until she was admitted to a specialist dementia care home in 2011.

He speaks movingly of that experience and the journey they went on together as the disease progressed. As a family carer, he faced increasingly difficult challenges for almost eight years, as Kay gradually forgot everything she had learned over the previous 69 years.

John has established a Friends group at Kay’s care home as well as recruiting a small team of volunteers. He also assists the activities team in running a Film Club and a Car Club.

In his professional life John worked for the BBC on the technical side of radio and television production. He then joined Decca Records as Studio Liaison Manager, moving finally to the computer company ICL as a Project Manager leading a team of around 50 people.

At ICL he was also involved in graduate recruitment and training.